Gymnast is back to a "Happy Handstand" after PT

“Being in pain is no fun. On February 8, 2016, I was in a car accident which caused a seat belt injury to my left ribs. The E.R. said nothing was broken, but after three weeks of taking pain meds and still suffering, I began to experience back and side spasms. This led me to go to an on-call, where they were hesitant to send me to P.T., but finally agreed. I immediately called Maccio PT. 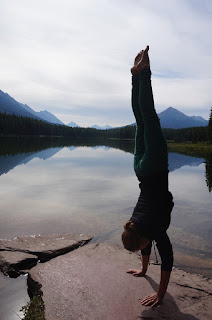 I chose Maccio PT because I had previously been successfully treated here. As an avid runner, I was referred there by a Orthopedic Sports Dr. about three years ago when I was experiencing plantar fasciitis in one foot, a stress reaction in the other foot and lower back issues. Since following the Maccio treatment plan, I had been running pain free, until the accident occurred.

With this injury it hurt to breathe, cough and sneeze- let alone run, jump or workout! This made my job as a gymnastics coach almost impossible. Skills that I normally demonstrate or spot on a daily basis were just too painful to do. Thankfully Joe and Lindsay knew exactly what exercises to prescribe for me. By following their plans, I quickly progressed so that after a week I could start running again. By one month I was able to spot and demonstrate at the gym again.

By choosing Maccio I have witnessed, now twice, the successful application of the McKenzie Method on four different areas of the body. Thank you Joe Sr. and Lindsay for getting me back to “joyful” running and being able to have a “happy handstand!”


This is why we do what we do!

Posted by Maccio Physical Therapy at 8:09 AM